I love a good craft beer on tap!

One of the best things about homebrewing, at least in my opinion, is the ability to keg your homebrew and have a variety of draft beer at your disposal. Of course you need a kegerator, keezer, or spare refrigerator laying around in order to serve that beer.

I purchased a Kegland Series 4 kegerator as a Christmas present to myself, and wanted to do a review for anyone that may be looking to buy this specific kegerator.

So without any further BS, lets jump into my Kegland Series 4 kegerator review. 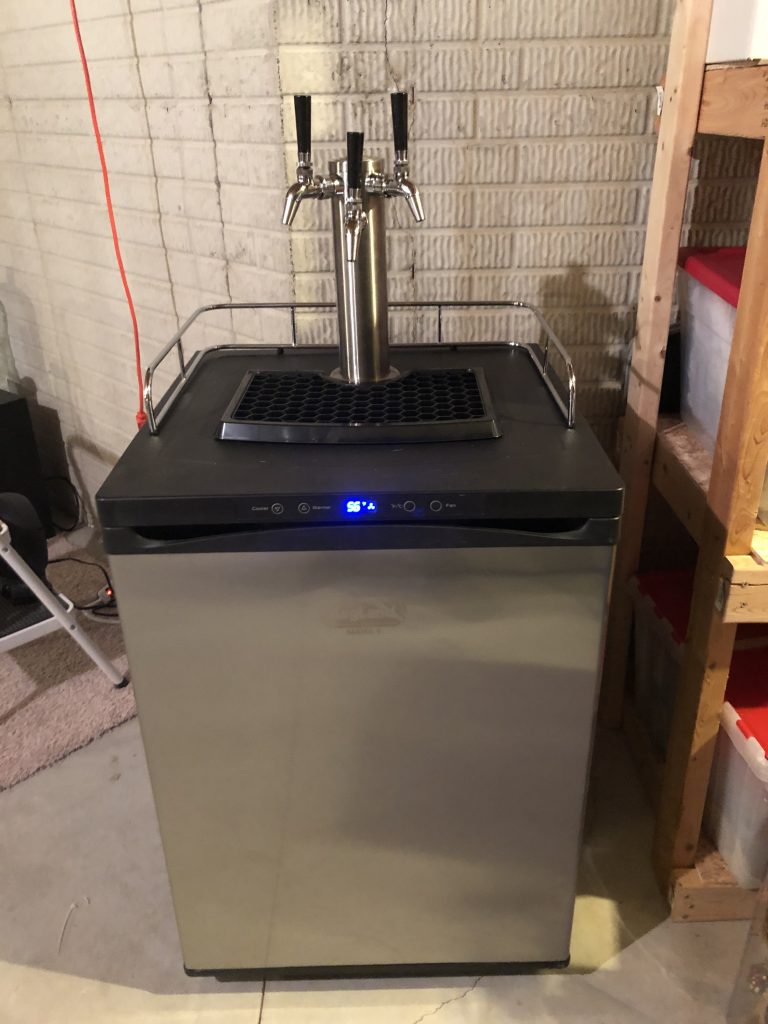 The features, cost, and keg configuration are the 3 items that led me to purchase the Kegland Series 4 kegerator over the other kegerator’s on the market. You’ll see why in a moment.

Before we start looking at the key features of this Kegland Series 4 kegerator review, let’s take a look at what comes in the box:

The dual gauge regulator came with my purchase from MoreBeer. That is not typically an included item when purchased elsewhere (I checked).

So what swayed me to purchase the Kegland Series 4 over any other kegerator? There were a couple of things that set this kegerator apart from others, at least for me:

I did a whole lot of research on faucets when I was toying with the idea of building a keezer. When I discovered the Kegland Series 4 kegerator came with premium stainless Intertap faucets that was a huge plus. While the Intertap faucets are standard, you can save about $20 per tap if you opt to go with the non-stainless option. You also have the option to go with the Intertap Flow Control faucet if you want that upgrade.

The second item that sold me was the integrated tower cooling fan. If you want to reduce a foamy pour, you want to ensure your beer lines are at or near server temperature. The tower cooling fan, all but assures that the cool air from the kegerator makes it’s way into the tower. 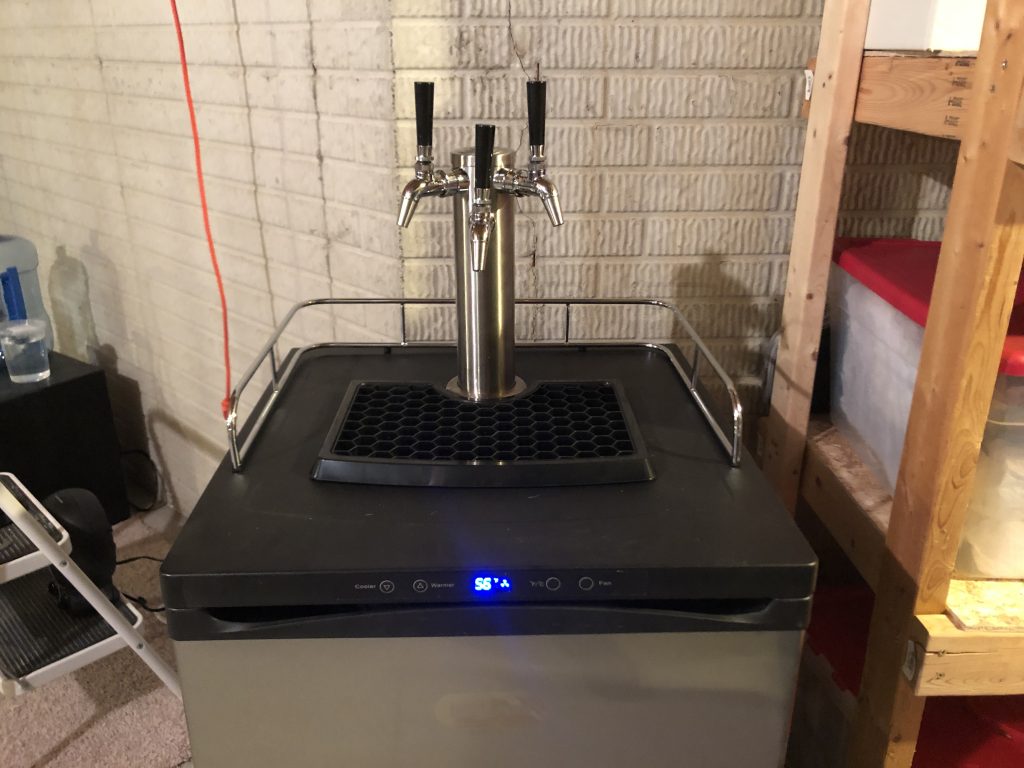 Set up of your new kegerator isn’t too difficult. You basically need to run the included beer lines from the kegerator up through the tower, and connect them to the tower shanks. Once you have that in place, you attach the tower to the kegerator body, and screw on the faucets to the shanks.

Same principal with the CO2 lines. While the kegerator doesn’t include a manifold, it does include the appropriate T’s for you to split you lines if you have multiple taps.

The most difficult part of the assembly was connecting the shanks to the tower with the beer lines attached. You don’t have a lot of room to work with.

All in all, it took me about 3 hours to get everything set up and running, but I made it a bit more complicated for a reason.

If you read the reviews of the Kegland Series 4 kegerator, you’ll see a common theme. The beer and CO2 lines that are included are a piece of shit. It seems there are a whole lot of struggles getting these lines connected to the appropriate connections. In fact the manufacturer doesn’t even include different line types for the gas or beer lines.

So I did what most people do, I ordered my own beer and gas lines, along with a manifold for the gas line connections. I figured if I was investing this kind of money in a kegerator, I might as well ensure I was doing it right.

If you’re looking for a kegerator that’s made for homebrewers, this is the one.

I ended up going with a slightly different configuration based upon my needs. I’m actually able to cram 4 different kegs into this kegerator without any issues:

The two Torpedo Kegs are able to be stacked, with the disconnects attached. This gives me 4 different kegs that I can have on tap at any given moment. While I only have the 3 tap kegerator, I use the smaller 1.5 gallon torpedo keg for various BrewGrounds that I do some playing around with. I simply attach a picnic tap to the fourth keg for serving. Beats having to bottle these smaller batches. 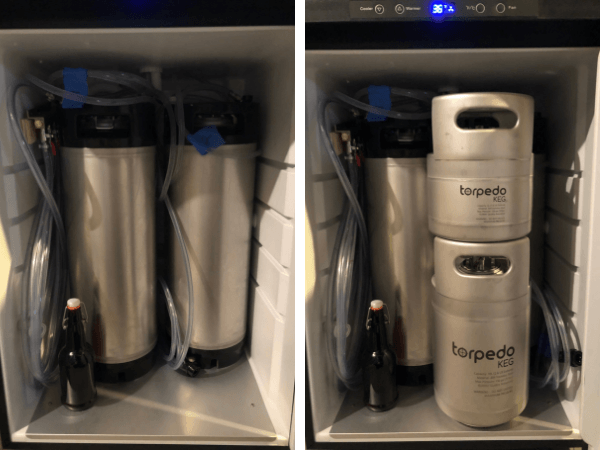 My impressions? I have nothing bad to say about the Kegland Series 4 kegerator.

I wanted a kegerator where I could have 3 different beverages on tap, and I ended up being able to get 4 (3 taps on the tower and one picnic tap inside).

The control panel is an all digital display, that gives a constant readout of the kegerators current temperature. The temperature can be set from 26 degrees to 86 degrees Fahrenheit with the push of a button. So if you don’t have anything ready to serve, you can easily use this kegerator as a fermentation chamber. Temperature can be displayed in either Fahrenheit or Celcius, and the tower cooling fan can be turned on & off with a simple button push. 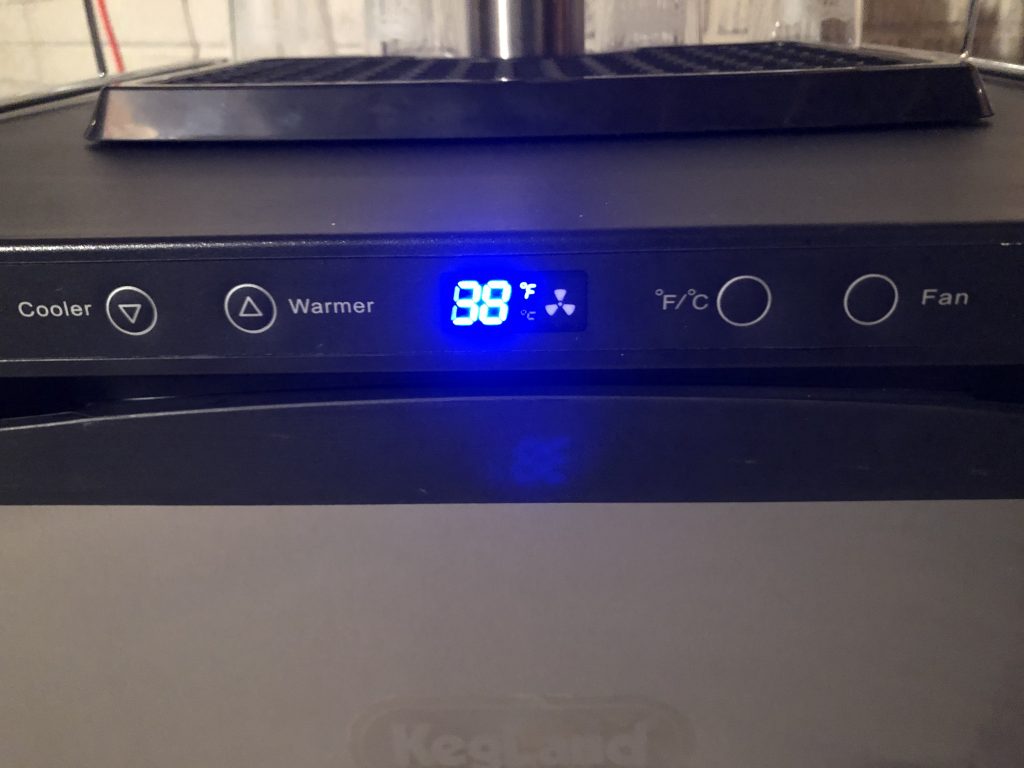 Am I happy with the Kegland Series 4?

After using this kegerator for the first month, absolutely. I’ve had no complaints other then a minor leak in one of the faucets, that very well could have been attributed to user error on my part, since I was screwing around with one of the taps prior to assembly.

The standard Intertap faucets are a huge plus, and something you don’t see on a lot of kegerators. Don’t forget, if your purchase through MoreBeer, you also get a dual gauge CO2 regulator included.

The cost of the Kegland Series 4 Kegerator was $659.99 through MoreBeer, and included free shipping. That’s for the 3 tap model with the stainless Intertap faucets. I ended up spending a bit more as I upgraded all the lines, and purchased a 4 way manifold in order to split my gas lines.

All in all, this is a quality kegerator that gives you a number of options for serving kegged beer (or any other type of beverage).