Thought I’d do a quick Slimline Torpedo Keg review based upon a recent addition I made for my kegerator.

Here’s the backstory. I received a new 3 tap kegerator for Christmas, and I had plans to turn this into a 4 tap setup. I simply wanted to maximize the number of beverages I could have on tap at any given moment. Now granted one of the “taps” would need to be a picnic tap that was accessed from inside the kegerator, but I was ok with that.

I would need to go with a smaller volume keg if I wanted to fit 4 kegs in my kegerator, but since I brew a number of smaller batches, that wasn’t going to be a problem for me. The 4th keg that I would serve from the picnic tap, would be an ideal solution for my BrewGrounds.

On with my Slimline Torpedo Keg review…

I heard about the Torpedo Keg’s when researching some smaller version’s of the corny keg. These appealed to me over the corny’s because you can easily stack them on top of each other. Yea, you can stack the corny kegs, but the difference with the Torpedo keg is you can have the quick disconnects for your gas and beer lines attached when they’re stacked.

The second advantage over the corny’s is they come in two different footprint’s. So if you are tight on space, the Slimline version of the Torpedo keg is a potential solution to that problem.

I ordered my Slimline Torpedo kegs directly from MoreBeer, along with a few other goodies, and they arrived a few days later (free shipping). I purchased both the 2.5 gallon and 1.5 gallon sizes.

Packaging was superb. Each keg was individually boxed, and placed in a larger box with the other things that I ordered. Both kegs were pressure tested prior to shipping, and each keg had to be bled upon unboxing. Unfortunately I don’t have a picture of the boxing, but here’s what they look like prior to being filled. 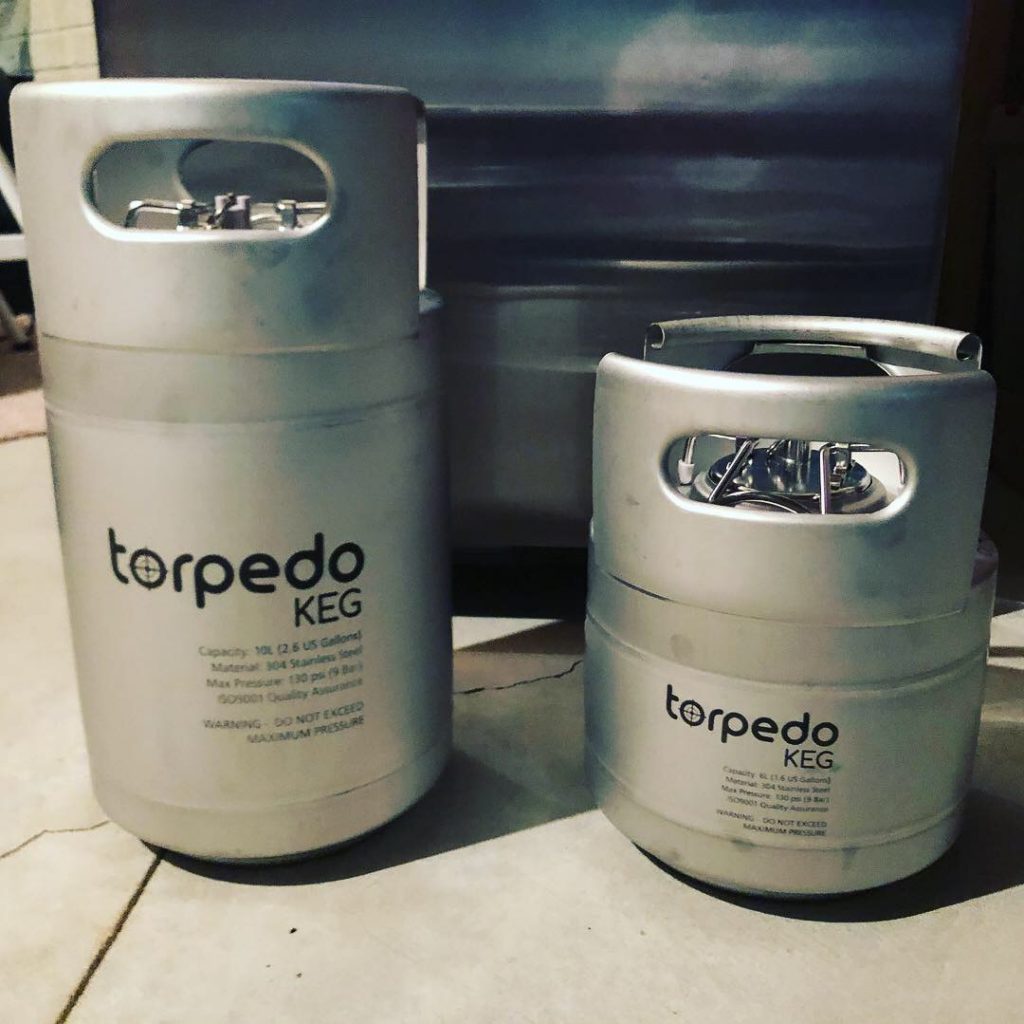 Wanting to take a further look at the innards, I released the latch to pull off the top. My initial reaction was this thing was noisy as fuck. Almost like nails on a chalkboard. Once the latch was released, I seemed to fight with the lid to get it out of the damn opening of the keg. It seems you have to have the lid positioned just right in order to fully remove it. A minor annoyance, that I’m sure I’ll get used to. 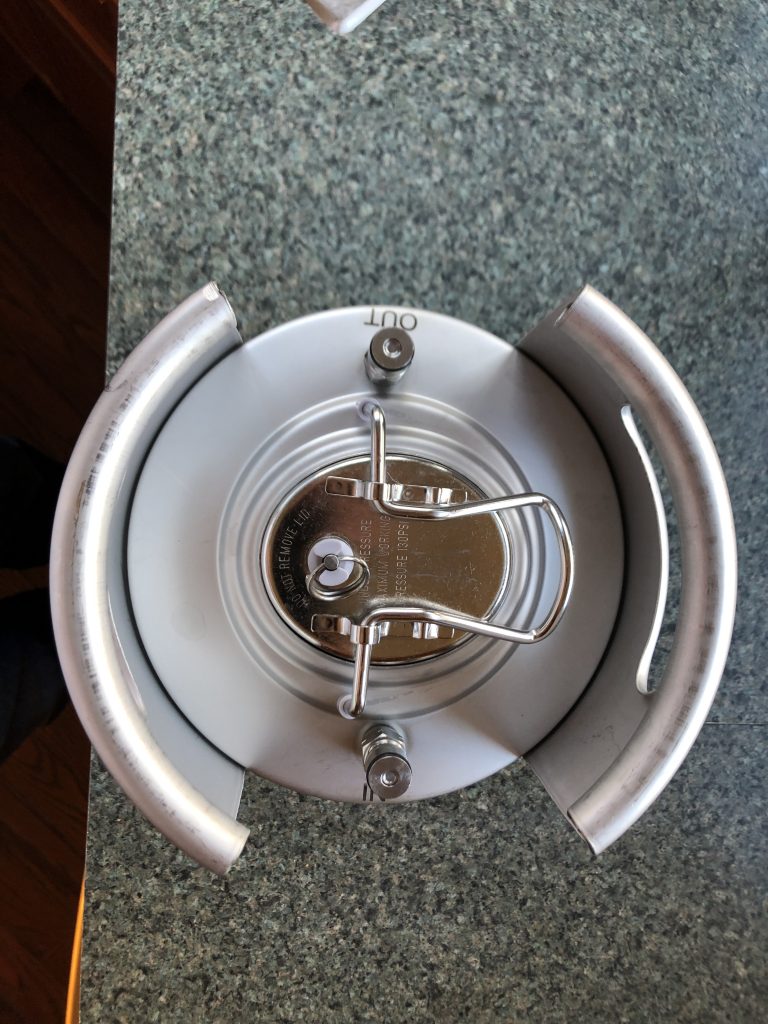 One of the key differences between a corny keg and the Torpedo keg, is how the bottom of the keg is machined. The corny keg has a somewhat flat bottom, with a small valley in the middle of the keg that the dip tube curves into. Almost a concave design.

The Torpedo keg has more of a convex design, where it’s higher in the middle and slopes down to the outer edges of the keg. The dip tube is straight as an arrow, and runs down the side directly to the bottom of the keg. Pretty sure I’ll be able to suck every last drop of beer out of these things. 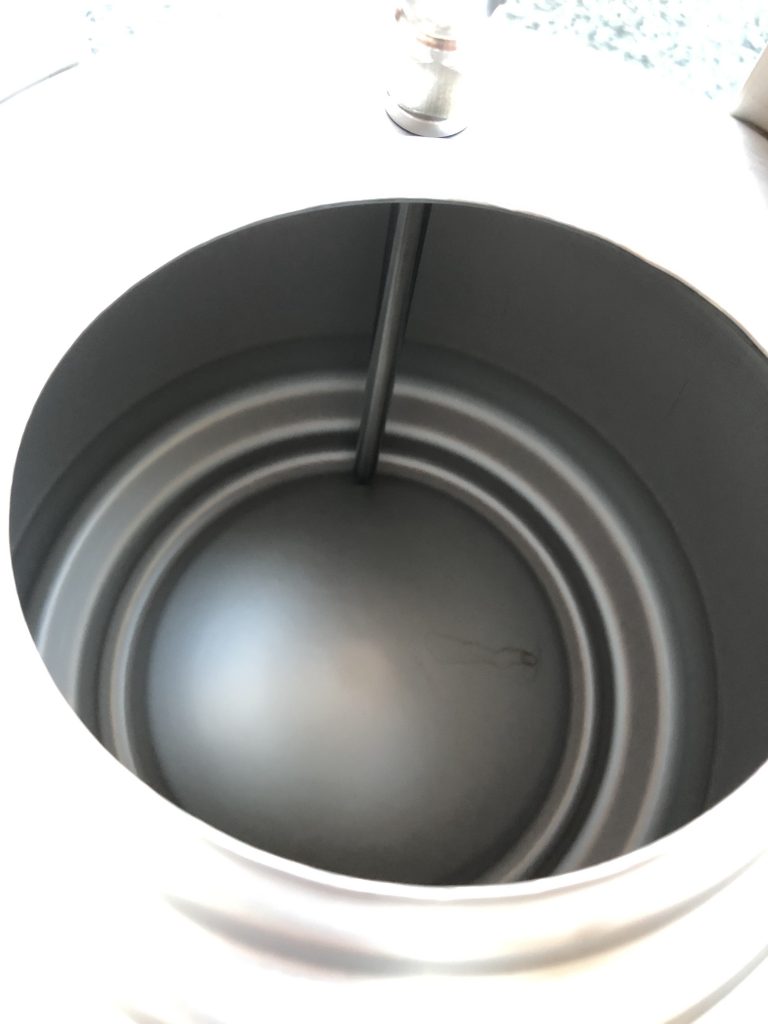 I wanted to get both of the kegs cleaned and sanitized, and prepped for my next batch of homebrew. My hidden agenda was I wanted to test for leaks.

I read a few reviews prior to purchasing that some folks were having a hard time getting their Torpedo kegs to seal properly. In fact MoreBeer has a video up on their site that shows the easiest way to get a leak free seal with these kegs. The recommendation is to attach your gas line and start pumping CO2 before you latch the lid. Let the gas properly seat the lid before you latch it down.

Now I’ve never had a problem getting a proper seal on my corny kegs, so this has me a bit worried that I have to go through an extra step to get a good seal.

I filled each keg with cleaner, latched the lid, and gave the thing a good shake. Sure as shit, water started leaking out the top of the keg. A seal problem!

I took a look at the lid, and I could tell that it wasn’t sealed just right. A quick repositioning of the lid seemed to solve the problem. After dumping the cleaner and rinsing, I poured some sanitizer into each keg, and gave each a quick burst of CO2. No leaks!

So I just need to be extra careful when positioning the lid before latching, and confirm I have a good seal after shooting my CO2.

Now comes the real test, my first fill. I just happened to have a Pale Ale that was finishing up in the primary, so this would be my guinea pig.

I racked the beer into my 2.5 gallon Slimline Torpedo keg as normal without any issues. Normally I’ve been racking my small batch beers into 5 gallon Corny kegs, and just living with the excess head space. I really liked the ability to have a smaller keg, as it was lighter and easier to maneuver.

When I attached the lid, I paid particular attention to how the lid was positioned before latching. So far so good. I hit it with CO2 to purge the keg, and watched for leaks with a quick spray of StarSan around the seal. All was good.

This was going to be the third keg in my kegerator, and didn’t have any issues getting it to fit. No reorganizing, no jostling around kegs, it simply fit without issue. For kicks, here’s a picture of the stacked Torpedo kegs in my kegerator, so you can get an idea of how they fit. 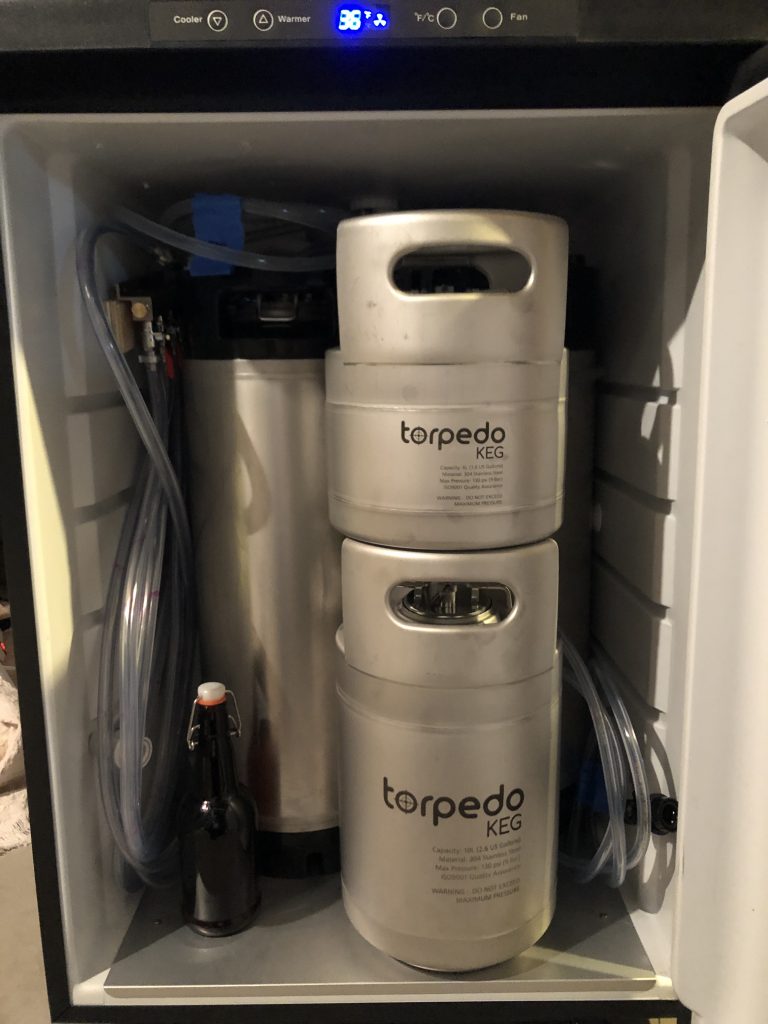 All in all, I am extremely happy with this Slimline Torpedo keg. It’s lighter then a standard corny keg, at least it seems lighter, and does exactly what I need it to do. Serve beer!

Now granted, these are slightly more expensive then a standard corny keg, but you also get a few additional features.

If you have any further questions on my Slimline Torpedo keg review, feel free to leave a comment below and I’ll get back with you.